Boy visited the famous Bungsamran Lake in Bangkok. Fishing a quiet corner of the lake Boy presented a goldfish livebait in area regularly frequented by one of the large Arapaima. After several aborted takes Boy?s livebait was finally picked up by an extremely large Amazonian predator! An epic battle ensued which lasted almost one hour which saw the monster fish snagged on various occasions. After repeatedly freeing the prehistoric fish on numerous occasions the fish was finally netted in shallower water and photographs were taken. An estimation of 100kgs plus was placed on the fish with Boy preferring to release the monster without weighing it, not wishing to place the monster fish under any more stress than necessary. The giant fish was then safely released back into the murky depths of the lake. 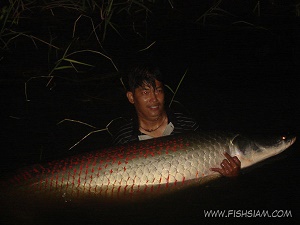