Visiting specimen angler John Cheong from Singapore went Arapaima fishing at the highly productive IT Lake Monsters in search of predatory giants.
Guided by Boy the angler caught various predatory species throughout the day with several large Redtail Catfish and Sorubim being brought to the bank.
With the light fading the angler’s mackerel deadbait was picked up by a much larger predator.
With yard upon yard of mainline being ripped from the spool it was clear that one of the lakes large resident Arapaima gigas had picked up the bait.
The fish powered off all round the lake performing aerial displays whilst trying to shake the hook from its jaws!
The battle with the monster fish was a highly protracted affair lasting almost two hours before finally being netted by Boy.
With a length of well over two metres and a gigantic girth the fish was estimated to 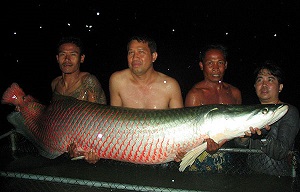