Francois Pineau international specimen hunter from French Guyana visited the legendary Bungsamran Lake in Bangkok. Joined by Boy and pro-guide Ow, Francois fished for the awesome Arapaima Gigas. Fishing with large deadbaits positioned in a prebaited area, Francois successfully hooked and landed a massive Arapaima weighing an estimated 160 kg?s. The gigantic Amazonian predator gained the sanctuary of the snags on various occasions during the battle requiring the anglers to use an old wooden dug-out canoe in an effort to release the wily monster. On netting the mighty beast the anglers found the boat to be less than seaworthy with the boat rapidly taking on water.
Local expert and friend Mut accompanied by Ow and two of the Bungsamran team quickly made for the bank with the boat quickly filling with water. Mut bravely clasping the monster fish in two nets with the aid of Ow and the other locals quickly brought the fish into the margins where it was quickly unhooked and photographs were taken. Francois being a highly experienced specimen hunter opted to not weigh the mighty monster not wanting to harm the mighty beast. An estimate of 150 kg+ was placed on the creature which was safely returned to its watery home. 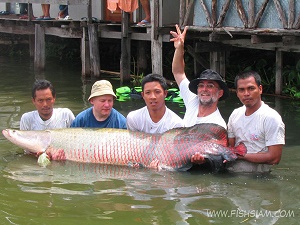