On Boxing Day 2007, Tom Parker a returning FishSiam client from Coventry in the United Kingdom visited the mighty Ban Pakong River in Chachoengsao province. After two days unsuccessfully targeting the elusive and nomadic Giant Freshwater Stingray Toms 700g livebait was finally picked up by a Giant freshwater stingray of mythical proportions.
After an epic battle lasting over an hour the prehistoric beast was finally landed.
Tom was aided in his capture by members of the FishSiam team Ohm, Q and Boy.
Sadly, due to the immense size of this monster fish the team were unable to weigh it.
Estimates with regards to the Giant freshwater stingrays size ranged between 180-200 kgs.
The capture of the Giant freshwater stingray was highly documented in the U.K and was featured in the Angling Times.
If the higher of the scale of estimates is correct this fish is possibly the largest true freshwater fish ever captured on rod and line at the time of writing 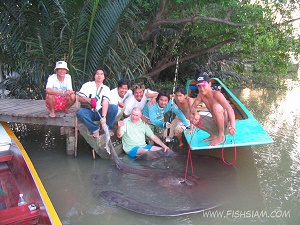