Irish angler Thomas continued his Thailand fishing holiday at the Maeklong River after previously catching a few small stingrays the day before.
After positioning themselves on a wide section of the tidal river the angler waited for the Giant freshwater stingrays to arrive.

After several hours one of the baits was picked up and an epic battle began.

Changing the angle of pull soon had the Giant freshwater stingray moving again towards the deepest channel of the river.
With the boat at times being pulled by the powerful stingray it was clear that it was a big fish.

An estimation of 200kg’s was placed on the freshwater stingray landed which was measured at a width of over 2m’s.

The Giant freshwater stingray was released after a short period for recovery and swam off strongly back into the Maeklong River. 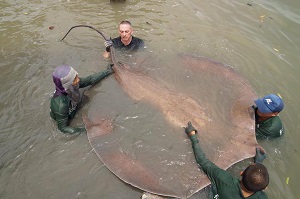