Visiting specialist angler Richard Mark from Singapore returned to the Maeklong River in Samut Songkran fishing for Giant Freshwater Stingrays.
Guided by Boy the angler soon found himself motoring upstream towards the infamous Area 51 stretch of the Maeklong River.
Armed with the strongest of tackle the angler was soon positioned on a wide bend which has previously produced World record sized Giant Freshwater Stingray.
Fishing with extremely strong and robust 6ft stand up rods fitted with roller guides and coupled with strong Shimano two speed multiplier reels the anglers quickly dispatched large livebait’s to the river bottom some twenty metre’s below.
Rigs consisted of ten metre lengths of Suffix fluorocarbon attached to 100lb Power Pro braided mainline. 500g weights were attached breakaway fashion to long three metre hooklengths of 130lb attached to size 9/0 Owner SSG circle hooks which completed the set-up.
After barely fishing for the stingrays for an hour a slight tapping was seen on one of the rods.
Richard readied himself as line started to evaporate from the multiplier!
Calmly setting the hook Richard wound into the fish which started to move slowly across the riverbed towards open water.
After applying more pressure the fish was turned before it proceeded to clamp onto the riverbed with an unmovable force.
Repositioning the boat over the unseen fish the anglers continued to apply pressure attempting to prize the fish off the bottom.
After lifting the fish clear of the bottom on several occasions a large Giant Freshwater Stingray was finally brought alongside the boat.
The creature’s deadly tail was instantly secured by Boy as the fish was brought over a waiting net and then transported to the riverside.
The fish was observed to be a large male and estimated to weigh between 50-60kg’s (1.25m).
After recording scientific data and photography were completed the Giant Freshwater Stingray was released.
With high water levels still keeping the river at its fullest the anglers returned to the Area 51 bend in the hope of catching another prehistoric predator.
After rebaiting the rods the anglers settled back and waited for another fish.
One and a half hours later a screaming run developed on one of the rods.
With line peeling off of the spool it was apparent that a much larger Giant Freshwater Stingray had picked up the bait!
Richard immediately pulled on the fighting harness and jammed the rod butt into the gimble before winding down into the unseen predator.
A two hour battle followed which saw the anglers and boat being towed out into mid stream with the massive Giant Freshwater Stingray characteristically clamping onto the riverbed and thrashing at the leader with its abrasive tail.
After lifting the fish from the bottom on several occasions Richard aided by Boy struggled to lift up the rod. Using every last ounce of strength the fish was finally brought alongside the boat and engulfed in a purpose made net.
The massive Giant Freshwater Stingray with a width of 2m+ was clearly a large fish and was observed to be an extremely chunky specimen.
An estimated weight of 190-200kg was placed on the fish before scientific data was recorded and photography carried out.
The massive Giant Freshwater Stingray was released unharmed after capture back into the mighty Maeklong River. 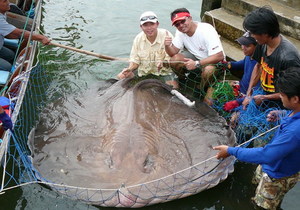