After enjoying a few leisurely days at Cha Am fishing park, Gavin decided to end his Thailand fishing holiday with some freshwater stingray fishing at the Maeklong River.
On arrival at the Maeklong River the angler was soon positioned on a wide sweeping bend with floats deployed across the river.

Gavin waited patiently for his next take to come and was soon rewarded by another take.
The Giant freshwater stingray this time felt slightly bigger and required the angler to position the boat over the stingray to extract it from the riverbed.

Gavin didn’t receive any further action from the stingrays for the rest of the day and returned to Bangkok in readiness for his flight home. 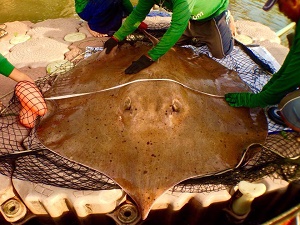