John Paul from Singapore started his fishing holiday with a days fishing at IT Lake Monster.
The Singaporean angler wasted no time in casting his lure into the lake.

After several slow retrieves the lure was aggressively hit by a small Sorubim.

A change over to bait in the afternoon saw the beginning of a frenetic feeding spell which saw Redtail Catfish landed on almost every cast.
The Redtail Catfish ranged in size from 10-30kg’s.

With several Chaophraya Catfish clearly cruising on the surface out in the centre of the lake a live bait was offered under a large bung and cast towards the fish.
The float remained motionless for several minutes before being buried under the surface.

John Paul continued to fish for another couple of hours landing yet more Redtail Catfish and bringing his tally of Thai predators to well into double figures. 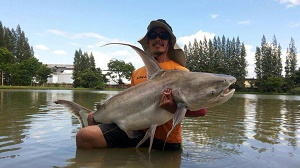