Using bread flake as a hook bait the angler fished quietly in the margins in an attempt to catch a Giant Siamese Carp.
Lightly baiting a swim in the nearby margins Gavin gently swung his float into position.

After a few minutes the float tilted slightly before falling flat on the surface.
The angler struck immediately setting the hook into a Striped Catfish which exited the swim at a rate of knots.

Large swirls could clearly be seen over the baited area as the float was buried once again under the surface.
Immediately the fish responded by powering off towards the central part of the lake leaving a large bow wave in its wake.

A fifteen minute battle followed which saw the angler expertly playing the large carp far out in the lake.
After finally bringing the carp under control the carp was netted by the guide.

The Giant Siamese Carp was estimated to weigh 35kg’s and was proudly displayed for the camera.

Gavin continued fishing for the rest iof the day but failed to catch any further carp.
The Striped Catfish and Mekong Catfish were much easier to catch with the angler landing possibly twenty Striped Catfish throughout his hectic days carp fishing 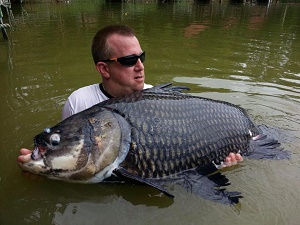