After catching carp and catfish the day before, the angler decided to fish at the Predator lake for the various native and imported species.
On arrival the angler offered mackerel fillets mounted on Owner hooks which were freelined in the nearby margins.

After an hour of fishing with no results the rod was away with the first predator of the day.
A short but spirited fight followed which saw an Asian Redtail Catfish of around 10kg brought to the bank.

The angler persevered with his angling and was soon rewarded with another Asian Redtail Catfish slightly larger than the last one.

The morning passed quickly with very little action, with the exception of a few dropped takes by unknown predators.

After stopping for a short lunch break the angler resumed fishing again and was soon connected to a better sized fish.
On this occasion the predator stayed deep hugging the bottom throughout the battle.

The Redtail Catfish was estimated to weigh 30kg’s and held aloft for the camera.

Gavin caught a few other smallish catfish before the days fishing ended and he retired to the luxury of his onsite bungalow for the evening. 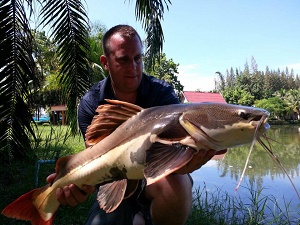