Rick and Boy visited the infamous Bungsamran in Bangkok. Fishing from the public area to a prebaited spot the anglers caught a few small catfish up to the 20kg mark in their first few hours of fishing.
At some time later in the afternoon an extremely fast take signalled the start of a fraught forty minute battle which saw the monster carp charging into every snag it could find! After coaxing the giant carp from the snags on various occasions the fish became firmly stuck amongst the wooden supports of the fishing platform. Boy was forced to enter the lake in an attempt to free the tethered fish! Carefully tracing the braided mainline back through the underwater jungle of timber and broken lines, Boy was able to find that the fish had passed through several of the underwater supports and was firmly tethered underneath the fishing platform. The net was passed under the wooden platform and with some considerable effort the monster carp was scooped into the net. After cutting the line the net was passed to the angler above. With the Giant Siamese Carp safely in the net and Boy back on dry land the fish was unceremoniously hauled from the lake and photographs were taken. The giant carp was weighed at 39 kilos. 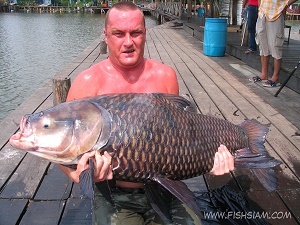