Two expat friends and returning clients Louis and Brendan visited the legendary Bungsamran in Bangkok.
Carp Fishing from the public area in a prebaited marginal swim the anglers caught a succession of Striped and Mekong catfish weighing upto the 28 kg mark.
At some time just after 6pm a fast take signaled the beginning of a thirty minute battle which would see Ow having to get in the lake in order to free the wily fish on two occasions! Louis having never caught a carp before was ecstatic when a massive Giant Siamese Carp of some 50 kgs was promptly netted!
The Giant Siamese Carp was weighed at just over 50kg. The anglers were joined by Boy and Ow in their capture of this mighty old warrior! 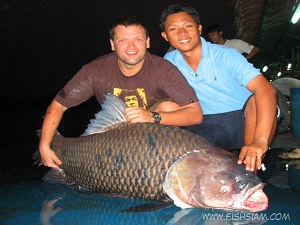