Francois Pineau a school teacher and returning client visited the infamous Bungsamran Lake in Bangkok. Fishing an early morning session the specimen hunter from French Guyana fished in the public area to a prebaited marginal hotspot. After a few Mekong and striped catfish the angler hooked a fish which powered off towards the snags! An epic battle ensued with the angler playing the Giant Siamese Carp for almost forty minutes. The giant carp managed to find the relative safety of the public fishing platform, requiring Boy to enter the lake to free the giant fish! After a few fraught seconds the mighty carp was released and the battle continued for another ten minutes until the carp was finally netted by Boy. On closer inspection the carp was found to weigh 50 kgs and was in immaculate condition. 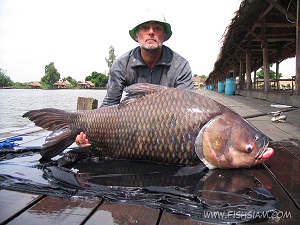