Tom Parker a returning client and friend visited the famous Bungsamran Lake in Bangkok in search of Giant Siamese Carp. Tom was joined by Boy and fished a prebaited marginal area in a quiet corner close to a bungalow.
At some time later that afternoon a fast take developed from the heavily prebaited area signaling that a large carp had picked up Tom?s buoyant hookbait. After a thirty minute tug of war which saw the giant carp snag itself amongst the structure beneath a nearby bungalow the fish was finally netted by Boy. The fish was weighed at 55 kgs and photographs were taken before slipping the giant carp back into the murky depths 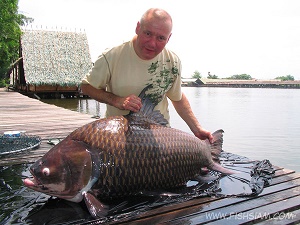