Fishsiam pro-guide Jeab returned once again to Bungsamran Lake in Bangkok fishing for carp and catfish.
Fishing to a prebaited marginal swim the local angler began to catch small Striped Catfish.
Jeab used 4oz Fox Method feeders loaded with local groundbait which were attached to fluoro carbon shock leaders and short 3 inch hooklink’s.
Atomic flying back leads and Owner hooks completed the set-up which was popped up over the baited feeder.
After initially catching several small Striped Catfish the swim suddenly died for the next few hours.
Jeab continued to top-up the swim with groundbait confident that carp would soon move into the area.
A mass of bubbles was observed over the baited area indicating the presence of feeding carp.
Fifteen minutes later a rod being fished on the edge of the area rattled off at an alarming speed.
Jeab expertly wound down into the fleeing carp letting the rod absorb the powerful lunges of the fish.
A massive swirl broke the surface some twenty yards from the bank as the power pro braided mainline quickly cut through the surface layers of the lake.
The large carp quickly changed direction heading directly for the snags.
Jeab responded by piling on the pressure turning the carp moments before it reached the snags.
The local angler would repeat this process several times over the next thirty minutes before the gigantic Siamese Carp was finally netted by Min.
On hoisting the massive Giant Siamese Carp onto the platform the fish was observed to be an extremely old specimen with a massive girth.
With no scales on site the fish was estimated to weigh 50kg’s+. The massive carp was carefully returned to the lake after photography.
Jeab continued to fish for a further few hours catching several Mekong Catfish to a whopping 70kg’s+!
The hectic up turn in sport from the Mekong Catfish put paid to any further carp being caught from the swim but yielded a further seven Mekong Catfish with weights between 14-70kg’s. 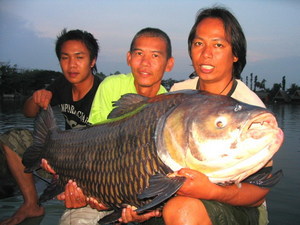