Ray Hughes a returning client from the UK visited the famous Bungsamran fishing park Lake in Bangkok fishing for Giant Siamese Carp and Mekong Catfish.
Ray fished a heavily prebaited marginal area in a quiet part of the lake and caught numerous Mekong Catfish to 35kg’s in addition to several Striped Catfish to 16kg’s.
Ray fished a buoyant hookbait suspended above a Fox method feeder loaded with locally produced groundbait.
Later in the afternoon the angler’s hookbait was picked up by a much larger fish which attempted to enter the snags.
Ray expertly retrieved the fish from the snags on several occasions during the epic battle which lasted forty minutes.
In the final moments of the battle the fish was brought into the net only to violently dive back down into the lake wrenching the net from Boy’s hands.
In desperation Boy instantly jumped into the water grabbing the net’s handle as it disappeared into the depths.
The massive Giant Siamese Carp continued to display immense power and actually pulled Boy under the water as he struggled with the fish.
After a few fraught moments the net was finally brought to the bank with the fish still thrashing wildly.
The fish was allowed a few minutes to recuperate before being hoisted up onto the scales.
An accurate weight of 46.6kg’s was recorded before the fish was carefully released back into the lake. 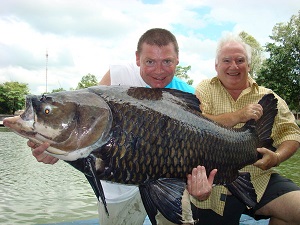