Mr.Y.L Tan a visiting angler from Malaysia joined Boy at the famous Bungsamran Lake in Bangkok in search of Mekong Catfish.
Fishing a short six hour session Mr.Tan caught numerous Striped Catfish in addition to several Mekong Catfish with weights to 40kg’s.
At some time later in the afternoon Mr.Tan’s sliding float setup suddenly burst into life signaling the beginning of an arm aching ninety minute ‘tug of war’.
The massive Mekong Catfish entered the snags on various occasions requiring the angler to apply maximum pressure to prize the monster catfish from its underwater sanctuary.
After almost an hour and a half of continued pressure the massive Mekong Catfish was finally netted with the aid of two nets.
After hauling the gigantic Mekong Catfish onto the platform the fish was estimated to weigh 75-80kg’s requiring three anglers to lift it off the ground! 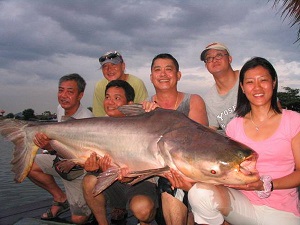