Koto San international angler and good friend joined Boy at Bungsamlan Lake in Bangkok. The Japanese businessman and Boy fished in a quiet corner of the lake in an attempt to capture one of the lakes mighty predators the Arapaima gigas. Using goldfish livebaits the anglers placed two rods in the path of a large Arapaima which was regularily patrolling the marginal swim. After a relatively short period of time a massive boil over the hookbait appeared with the braided mainline dancing as the goldfish livebait tried to evade its impending fate. Seconds later the massive Amazonian predator surfaced and the mainline pulled taught, Koto San expertly set the hook in the fishs bony mouth and battle commenced! Some fifteen minutes passed with the fish characteristically heading towards the snags on several occasions. Boy was forced to enter the lake in an attempt to free the angry fish! Finally the Amazonian monster was netted and brought to shallower water. Boy held the mighty predator for photographs and the fish was quickly released without being weighed. The monster fish was estimated to weigh in the region of 70-80kgs 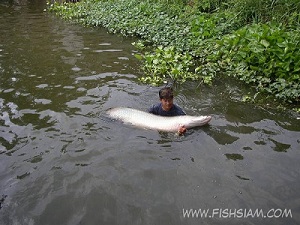