Brendan returning customer and friend visited Bungsamran Lake in Bangkok for an afternoon session with Boy. Fishing a prebaited swim on the public area the expat caught a succession of small catfish upto the 20kg mark.
At some time in the afternoon Brendan?s buoyant hookbait was picked up by something much larger! This take would mark the beginning of an epic one hour fifty minute battle which would see the monster Mekong catfish power angrily off to every corner of the lake! Throughout the adrenaline filled battle Brendan was towed up and down the public fishing jetty whilst dodging the many local anglers fishing alongside him. On several occasions the giant fish reached the safety of the snags requiring Boy and local expert Jun to free the monster fish with the aid of a boat! After almost two hours the Giant Mekong Catfish was netted with the use of two nets! An attempt to hoist the mighty catfish onto the fishing platform revealed the true size of the monster! Unable to lift the fish onto the platform the scales were produced and a reading of over 80 kgs was observed. Photographs were taken in shallower water where the giant fish was allowed to recover and then released. 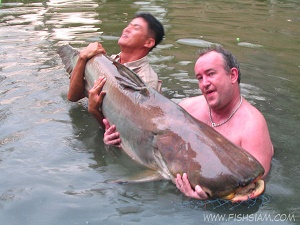