Thomas from Ireland continued his Thailand fishing holiday with a visit to the lure only Amazon BKK2 Arapaima fishing pond near Bangkok.
On arrival at the pond the angler was greeted by lots of Arapaima topping all over the lake and wasted no time in casting a lure amongst them.

With the fish at Amazon BKK2 being some of the wily and shy fish in Thailand the lures remained untouched for several casts.
Moving round the lake several more Arapaima were spotted by the guide and a lure was once again cast in their direction.

Slowly retrieving the lure past the group of fish saw an aggressive strike from an Arapaima followed by a large explosion in the water.
A good sized Arapaima breached clearly out of the water before diving back into the lake on a powerful head shaking run.

The Arapaima stayed deep for the next few minutes out of sight and continued to ferociously shake its head in an attempt to rid itself of the lure.
The trebles stayed true and the fish was safely guided into the bankside cradle.

The Arapaima was estimated to weigh 50kg and was proudly displayed for the camera.

The days lure fishing at Amazon BKK2 Arapaima fishing produced several more Arapaima in the following hours with weights ranging between 15-40kg.
At the end of the days lure fishing Thomas had managed to land five fish in addition to dropping several others due to bad hook holds. 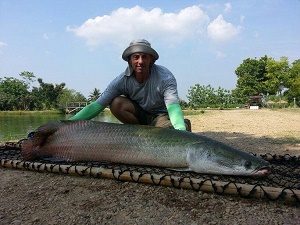