After an unsuccessful day fishing for stingrays, Liszt and his fishing companions visited Amazon BKK2 fishing for Arapaima and other predators.
The anglers used a variety of lures which they cast at various points around the lake into likely looking areas. After several near misses one of the anglers was bent into the first Arapaima of the day which tore off across the lake.
The Arapaima was soon brought under control and netted and was estimated to weigh 30kg’s.
Further cats saw several more aborted strikes causing the anglers to move to another spot.
In the following hours the anglers landed several more Arapaima with weights ranging between 25-35kg’s.
Towards the end of the days Arapaima fishing at Amazon BKK2 one of the anglers lure was picked up by a much bigger Arapaima.
On this occasion the large Arapaima hit a lure close to the edge before nearly spooling the angler on its first run. Sadly the monster Arapaima was lost soon after by managing to shake the lure free from its mouth.
The days fishing ended with anglers having caught Arapaima up to almost 40kg with a surprise Alligator Gar also included in the capture 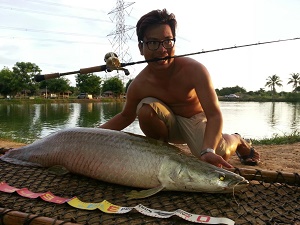