Visiting UK anglers Colin and Ray joined Boy on a predator fishing trip to the highly prolific IT Monster Lake in Ratchaburi.
The anglers chose to fish with baits throughout the day and presented mackerel fillets and small Tilapia livebaits on Owner Circle hooks attached to long 100lb Fluro carbon hooklengths.
An early morning start saw Ray into a succession of hungry predatory fish with a large 50kg Arapaima gigas falling to a mackerel fillet fished in the margins.
The 1.5m predatory giant was beaten after a thirty minute battle which saw the fish angrily shaking its head in an attempt at shaking free the hook!
The anglers enjoyed constant sport throughout the day with Redtail Catfish to 30kg’s, Spotted Sorubim to 30kg’s,Alligator Gar and Asian Redtail Catfish also making an appearance.
Colin also bagged a bonus Giant Snakehead of 6kg’s which picked up a float fished deadbait.
With the afternoon sunshine just fading away Colin received an extremely aggressive take which stripped yards of line off the reel!
After clamping down hard on the spool a large armored body surfaced in the centre of the lake confirming the fish to be an Arapaima.
The battle commenced with the large predatory giant making a series of unstoppable runs.
Colin responded by applying more pressure which saw the fish finally netted thirty five minutes after the initial take.
The 1.5m Arapaima was estimated to weigh 65 kg’s+ and was carefully released after photography.
At the end of the days angling the anglers had both amassed a thirty fish haul consisting of a variety of predatory and catfish species 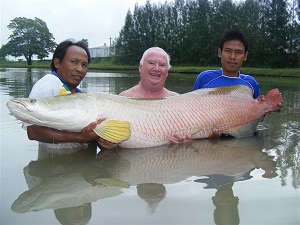