Anglers Mail journalist Ian Welch joined the Fishsiam team for a final days angling at the famous Bungsamran Lake in Bangkok.
After a serious drinking and eating session the previous evening where Ian consumed copious amounts of Som Tam (spicy papaya salad) all concerned in the venture were nursing serious hangovers!
Fishing at a leisurely pace Ian caught several Striped catfish in addition to a few small Mekong catfish to an estimated 20kg.
With a slowing of sport a livebait was setup and hurled towards the centre of the lake.
Soon after the bung slowly edged into life before being dragged under the surface.
This would be the start of a series of Chaophraya catfish which continued to hit the Tilapia livebaits offered just below the surface 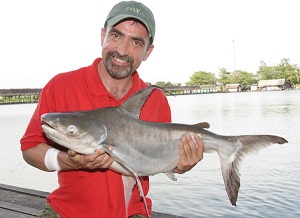