Singaporean angler Edward started his Thailand holiday with a trip arapaima fishing Amazon BKK2.
On arrival at the lake the angler quickly began casting lures at the many showing fish at various points around the lake.

After several aborted strikes the angler finally set the hook into a decent Arapaima causing the water to erupt as it wildly tried to shake the hook from its bony jaw.
The Arapaima embarked on a series of powerful head shaking runs stripping line from the reel as it powered off towards the central part of the lake.
Edward played the Arapaima expertly allowing the fish to tire itself out in open water, as the Arapaima started to slow down the fish was turned and brought back towards the waiting net.

The Arapaima was scooped into a recovery cradle on the first attempt where it thrashed wildly.
After allowing the fish a period of recovery the Arapaima was brought onto the bankside.

The stunning Arapaima was estimated to weigh 45kgs and was quickly released after a few trophy shots.

Edward’s day fishing at Amazon BKK2 continued with the angler landing a further five Arapaima with weights ranging between 20-35kg.
Regularly changing lure pattern allowed the angler to keep in contact with the fish and kept the strikes coming at regular intervals.
The angler also lost several other decent fish during the course of the day which saw Arapaima regularly slamming into his carefully cast lures. 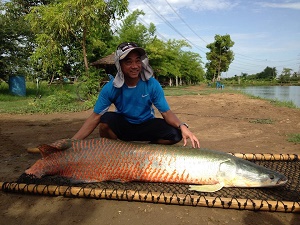