Mike from the USA continued his Thailand fishing holiday with a visit to Amazon BKK2 in search of Arapaima.
The angler stealthily made his way round the lake casting lures into likely looking holding areas.

After several unproductive casts the angler was soon attached to a good sized Arapaima which proceeded to power off towards the central part of the lake.
Putting the full bend of the medium weight spinning outfit into the rapidly departing Arapaima soon had the fish turned and the rest of the battle was fought out at close quarters in the margins.

After several head shaking breaches out of the water the Arapaima was brought under control and carefully netted.

The Arapaima was estimated to weigh 45kg and was quickly released after a few trophy shots.

Mike fished well throughout the day and landed two more Arapaima both over the 30kg range in addition to landing an extremely plump Redtail Catfish of an estimated 25kg.
On a day that had been both challenging and highly enjoyable the angler had also lost several fish due to inadequate hook holds adding to the excitement. 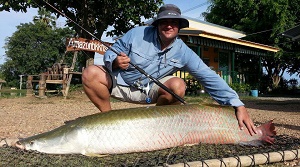