Austrian angler Thomas continued his fishing holiday in Thailand with a visit to IT Lake Monsters in Ratchaburi.
After making an early start the Austrian angler wasted no time in casting his lure towards showing fish.
On only his second or third retrieve the angler was rewarded by a savage take as a Redtail Catfish slammed into his Cultiva lure.
The powerful Amazonian predator bent his light spinning rod almost double as it charged across the lake.
After almost fifteen minutes the angler finally managed to regain some control over the fish where it was netted moments later.
The Redtail Catfish was estimated to weigh 15kg’s and was released after a few trophy shots were taken.
Further casts produced more action with Asian Redtail Catfish and Pacu all falling for the anglers expertly presented artificial lures.
After a quiet spell which saw no action for almost an hour the angler hooked into a much larger fish which embarked on a series of powerful runs across the lake.
After a further ten minutes a large Redtail Catfish surfaced several yards out in the lake causing a large bow wave to send waves crashing towards the bank.
Several fraught moments followed at the time of netting seeing the Redtail Catfish desperately trying to escape the waiting net.
The Redtail Catfish was finally netted and hoisted onto the grassy bankside where it grunted angrily.
The large Redtail Catfish was estimated to weigh 22kg’s and was released after several trophy shots were clicked off on the camera.
A change of tactics just after lunch saw the angler casting out a large mackerel fillet in the hope of catching more predatory monster fish.
Seconds later a high speed take saw line being ripped from the spool of the reel.
Winding down into the unseen predator saw the surface erupt out in the lake as an Arapaima threw itself out of the water in attempt to rid itself of the hook.
The small Arapaima was beaten after a relatively short five minute battle and a few more aerial displays.
The Arapaima was estimated to weigh a mere 12kg’s and was released after a few quick photographs.
The days fishing continued at a hectic pace and saw the angler landing a succession of hungry predators.
Thomas at the end of the days fishing managed to amass a large double figure haul of predators consisting of Redtail Catfish to 25kg’s, Asian Redtail Catfish, Pacu and several other species of monster fish. 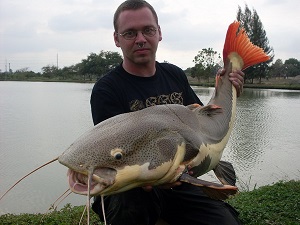