UK anglers Matt, Ashley and Stephen from Walthamstow in London visited the prolific IT Lake Monsters fishing for predators.
The UK anglers chose to fish with lures in the morning in an attempt to catch some of the many predatory species.
The morning produced several different species of predators with Alligator Gar, Pacu and Redtail Catfish all making an appearance.
Fishing was unusually slow due to a large amount of anglers fishing at the lake with over ten different anglers fishing at various parts of the lake.
A mixture of jointed shads, Rapala and Cultiva lures accounted for all predators caught throughout the mornings angling with some good Redtail Catfish to 15kg’s being landed by all the anglers.
In addition to lure fishing the UK carp anglers also indulged in a spot of carp fishing accounting for several Asian Carp species such as Small Scaled Mud Carp and Rohu on method feeder tactics.
At 2pm the anglers switched over to Bait fishing presentations and offered large mackerel fillets on super sharp Owner hooks.
Gently lobbing the deadbaits to fish showing several yards out into the lake soon resulted in a series of super charged runs from large predatory species.
Ashley and Matt were soon proudly displaying large Redtail Catfish of over 20kg’s for brace shots.
Stephen also added to the tally of predators with a good sized Asian Redtail and further Redtail Catfish.
Regularly baiting marginal areas continued to produce more fish with Sharp toothed Catfish and Pacu also homing in on the angler’s deadbaits.
The day continued in much the same fashion with all of the anglers landing a succession of hungry predatory species.
Redtail Catfish dominated the days angling with brutes of over 25kg’s being landed by the anglers.
In addition Stephen landed a small Arapaima of 20kg which was particularily pleasing due to the species being high up his list of target species.
At the end of the days fishing at IT Lake Monsters the UK fishermen had accounted for a large mixed bag of predatory species consisting of several specimens sized Redtail Catfish and a whole host of weird and wonderful predatory species. 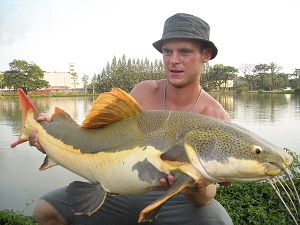