UK angler Dale continued his Thailand fishing holiday fishing for monster fish with a visit to the record breaking Palm Tree Lagoon in Ratchaburi.
Dale chose to fish for the monster sized Arapaima and Redtail Catfish which reside in its depths.
The UK angler set up a long fluorocarbon hooklink coupled with a super sharp Owner hook onto which he mounted large barb livebaits.
With fish showing all over the lake the angler cast towards the centre of the lake towards the showing fish.
Dale waited patiently for some time before the livebait was picked up by an unseen predator.
As line rapidly began to leave the reel the angler engaged the bail arm causing the rod to loop over into its full parabolic curve.
The fish responded by embarking on an extremely powerful run stripping yard upon yard of line from the reel.
A fifteen minute battle followed which saw the angler battling the unseen predatory fish as it charged around the lake.
Finally the fish revealed itself as a large red tail violently broke the surface layers causing a large bow wave in the nearby margins.
The monster catfish briefly headed into some nearby snags requiring the guides to enter the water and free the fish.
The large Redtail Catfish was finally brought to the waiting net and hoisted onto the unhooking mat.
The Redtail Catfish was estimated to weigh 25kgs and was released shortly after a few trophy shots.
Dale fished for the rest of the day and added a few other predators to his haul with another Redtail Catfish a few hours later of a similar size which tested the angler to his limits. 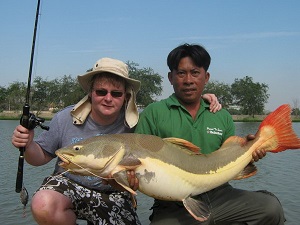