US angler Li continued his Arapaima fishing holiday in Thailand with a visit to Amazon Bangkok 2.
On arrival at the lake the angler was greeted by lots of Arapaima rolling out in the lake.

The angler quickly started arapaima fishing casting out a Cultiva lure towards the many showing Arapaima in the hope of inducing a take.
After several retrieves the angler changed lure to a different pattern and cast back towards the centre of the lake.

After several aborted takes the line pulled tight and the angler set the hook.
Immediately an Arapaima breached out of the water angrily shaking its head.

The Arapaima was estimated to weigh 25kg and was quickly returned after a few pictures.
Further casts saw several fish bumped off before the swim fell quiet.

A change of swim saw the angler once again stealthily casting lures close to the wooden bridge spanning the lake.
On the second or third retrieve the anglers lure was hit ripping line from the reel.

A large swirl formed out in the lake as the Arapaima gained speed before throwing itself out of the water.
The Arapaima was clearly a decent size and crashed back down into the water before embarking on another high speed head shaking run.

Li battled the Arapaima for fifteen minutes before it finally rolled over the net.

The Arapaima was estimated to weigh 45kg and was proudly displayed by the captor. 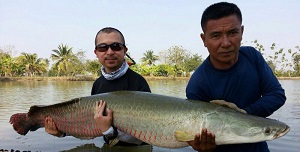