After a very hectic days arapaima fishing on the previous day Gavin returned to IT Lake for his second days angling.

Starting on the lure Gavin was soon catching Pacu, Asian Redtail Catfish and Alligator Gar throughout the early part of the day.

A change over to bait in the afternoon saw Gavin offering float fished deadbaits at mid water in effort to hook one of the many Arapaima which show regularly out in the lake.

After a short period the float burst into life as it was dragged under the surface, the line pulled tight and began streaming form the spool.
Gavin wound down into the unseen predator to be met by solid resistance, a loud crash out in the lake coincided with the fish embarking on a series of powerful runs across the lake.

After a lively battle lasting fifteen minutes a large dorsal fin cleared the surface of the water revealing the fish to be a Chaophraya Catfish.
After carefully leading the fish to the net the fish was quickly brought onto the bankside.

The Chaophraya Catfish was quickly photographed before being carefully slipped back into the lake and was estimated to weigh 25-30kg’s.

Further casts resulted in Pacu and a bonus Giant Snakehead which greedily snapped up the suspended fish sections.

After a quiet spell the float suddenly burst into life causing the angler to lift into a much more powerful predator.
From the powerful head shaking manner of the take there was little doubt which species was responsible.
Moments later a good sized Arapaima reared out of the water powerfully trying to expel the hook from its mouth.

Several more acrobatic tail walks followed before the Arapiama moved out into the centre of the lake.
After a fifteen minute battle the Arapiama was finally subdued and slowly brought over the unhooking cradle.

The Arapaima was carefully unhooked and allowed a short period for recovery before Gavin held it aloft for the camera.
The Arapaima was estimated to weigh 45kg-50kg and was slowly released back into the lake moments later. 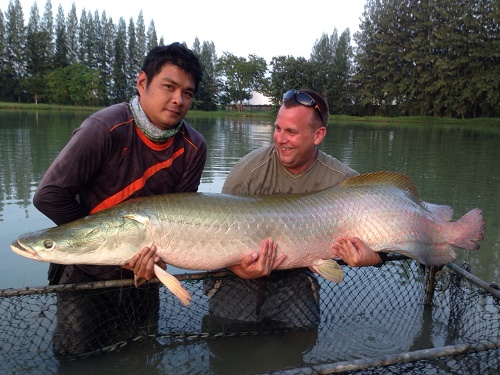