Rutger from Sweden continued his fishing holiday with a visit to the highly prolific IT Lake Monsters fishing for Arapaima and other monster fish.
On arrival at the lake Rutger began lure fishing with a medium weight outfit searching various parts of the lake with Cultiva lures.
Shortly after casting to a rising fish the angler’s rod was almost pulled from his grasp as a lively Pacu slammed into the artificial lure.
After a spirited battle lasting a few minutes the Pacu was quickly unhooked in the water and released.
Further casts into the productive area produced several more Pacu which enthusiastically attacked the angler’s lure.
A change of lure to a bigger deeper diving pattern soon saw a much larger fish hooked which stripped off a large amount of line on its initial run.
With the rod arched over into full battle curve the angler played the unseen monster fish as it powered off across the lake.
After fifteen minutes a large red tail slapped the surface several yards out in the lake revealing the fish to be a good sized Redtail Catfish.
The Redtail Catfish was slowly edged towards the waiting landing net before being scooped up by the guide.
The good sized Redtail Catfish was estimated to weigh 20kg’s+ and was released after photography.
Rutger fished throughout the morning with lures and accounted for several more Redtail Catfish in addition to catching more Pacu and a few bonus Alligator Gar.
After a short break for lunch the angler changed over to deadbait and was instantly into more Redtail Catfish.
Throughout the afternoon Rutger barely had time to stop as his baited area was overran by a large shoal of Redtail Catfish.
Fishing with large mackerel sections really paid off for the Swedish angler as he landed a succession of big Redtail Catfish to 34 kg’s.
At the end of the single days hectic fishing session Rutger had succeeded in landing a massive thirty fish plus haul of monster Redtail Catfish to 34kg’s in addition to catching both Pacu and Alligator Gar. 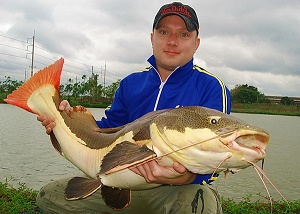