Visiting angler Michael started his holiday in Thailand with a visit to IT Lake Monsters fishing for Arapaima and other Amazon species.
On arrival at the lake the angler baited several areas before free lining mackerel fillet in the margins.
With fish showing all over the lake it wasn’t long before a predator picked up the anglers deadbait.
With line pouring off the spool of the reel the angler closed the bale arm and bent into the fish. A short but lively battle followed which saw the fish charging up and down the margins for the next few minutes before finally being netted.
The Redtail Catfish of an estimated 20 kg was quickly unhooked and then released further up the bank. Further casts into the area produced a string of further catfish with weights ranging between 20-30 kg’s.
After casting further out into the lake the angler was rewarded with several Pacu and a bonus Alligator Gar in addition to more Redtail Catfish.
As the day progressed the Redtail Catfish really homed in on his deadbait with runs continually coming throughout the afternoon.
At the end of the days predator fishing at IT Lake Monsters Michael had amassed a large haul of 25-30 predators with Redtail Catfish to 45 kg’s making up the bulk of his capture. 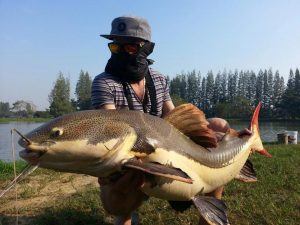