The second day saw the television crew once again fishing at the Maeklong River in the hope of latching into a real River Monster.
The first stingray landed was another relatively small fish weighing possibly 50kg.

The second take was from a much larger stingray which proceeded to tow the boat and anglers behind it for several yards.
An epic battle followed which saw the anglers taking turns to fight the battle.

After almost an hour the Giant freshwater stingray was eventually brought over the net. 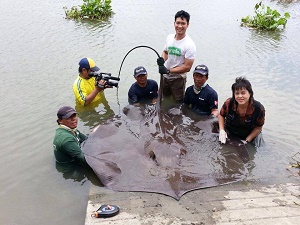