John from Sweden started his Thailand fishing holiday with a visit to Bungsamran Lake in Bangkok.
On arrival at the lake the angler baited large method feeders which were carefully placed by hand close to the structure of the fishing platform.

John caught several Mekong Catfish through the mornings fishing weighing between 10-25kg’s.
After a brief lull in proceedings the anglers noticed large swirls appearing over the baited area.

Ten minutes later a high speed take signalled the beginning of a fifteen minute battle.
On winding down into the unseen Giant Siamese Carp it immediately tried to gain the sanctuary of the snags causing the angler to guide the fish out into open water.
Once in open water the fish stayed deep throughout most of the battle only revealing itself in the final stages.

After surfacing for the second time the Giant Siamese Carp was quickly bundled into the net before being hoisted onto the unhooking mat.

The Giant Siamese Carp was estimated to weigh between 25-30kg and was released after photography.

No further carp were caught during the rest of the day as the insatiable Mekong Catfish continued to visit his baited area.
At the end of the days carp fishing Bungsamran Lake in Bangkok the angler had succeeded in landing a double figure haul of Mekong Catfish to 35kg’s topped by a single Giant Siamese Carp weighing between 25-30kg’s. 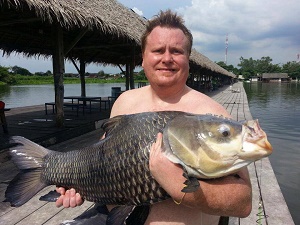