US angler Forrest decided to fish a short day fishing trip in Bangkok for Mekong and Striped Catfish at Bungsamran Lake.
Fishing from a private bungalow the angler cast out sliding float set up’s towards fish showing at range.
With the floats bobbing out amongst the hordes of showing catfish it was not long before one of the floats disappeared beneath the surface and line began to stream from the reel.
Winding down in to the fish saw the rod violently dragged towards the lake as the unseen Mekong Catfish responded with a powerful run towards the furthest part of the lake.
The American angler battled the fish for almost ten minutes before the Mekong Catfish was brought into netting range.
After hauling the fish onto the unhooking mat the Mekong Catfish was estimated to weigh 20 kg’s before being released.
After rebaiting the rods and recasting back towards the centre of the lake, Forrest’s girlfriend waited for the next run from a monster fish.
Shortly after one of the rods burst into life prompting the angler’s female companion to commence battle with another monster fish.
Both angler’s fished extremely well throughout the day landing a succession of monster Mekong Catfish.
On several occasions both anglers battled fish in unison as fish continually picked up their baited method feeder and float presentations.
After fishing for a full day the US angler’s amassed a twenty fish haul with several specimen Mekong Catfish to a gigantic 40kg’s+. 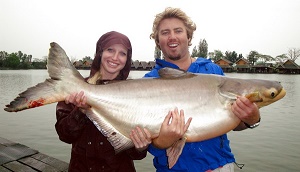