German angler Ulf and his fishing companion started their Thailand fishing holiday in Bangkok fishing for Mekong Catfish at Bungsamran Lake.
On arrival at the lake the anglers wasted no time in casting out large balls of groundbait on sliding float rigs towards the hordes of catfish showing in the centre of the lake.
After allowing the floats to settle amongst the many showing fish it was not long before one of the floats sank beneath the surface and line began to be ripped from the open spool of the reel.
On winding down into the unseen Mekong Catfish the rod immediately arched over as the Mekong Catfish rapidly powered off towards the far bank.
The Mekong Catfish then embarked on several unstoppable runs which saw Ulf hanging onto the rod as the fish kited from left to right across the lake.
After several minutes the Mekong Catfish began to tire and it was netted shortly after when it surfaced close to the fishing platform.
Further casts saw both Ulf and his companion adding more Mekong Catfish to their haul of monster fish with weights between 10 and 30kg’s.
As the afternoon wore on the anglers managed to land some slightly bigger specimens with both anglers landing Mekong Catfish to an estimated 38 kg’s+.
At the end of the days fishing at Bungsamran Lake in Bangkok the anglers had amassed a twenty fish capture consisting of Mekong Catfish to 38kg’s and several Striped Catfish with weights to 12kg’s. 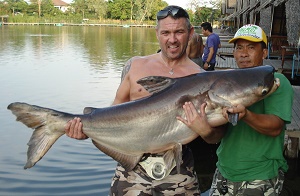