Jimmy and Amanda ended their fishing holiday in Thailand with a visit to Pilot 111 fishing ponds.
On arrival at Pilot ponds the angler was soon casting lures towards the many showing fish.
After only his third or fourth retrieve Jimmy was attached to his first fish of the day which promptly threw itself clear of the water.
After a short battle the Barramundi was netted and a few photos were taken.
Further casts resulted in plenty more Barramundi which all weighed between 2-4kg’s.
A quiet spell saw the angler changing lure pattern before action once again picked up.
Jimmy managed to add several more good sized Barramundi to his tally of fish with a couple reaching an estimated 5kg’s.
After a short break for lunch at the restaurant the angler decided to turn his attention to one of the adjoining ponds.
After several retrieves his lure was savagely attacked and battle commenced.
The fight on this occasion was slightly more protracted and resulted in a nice Asian Redtail Catfish of an estimated 6kg’s.
Jimmy continued fishing for the Asian Redtail’s and landed several more before the days lure fishing finished. 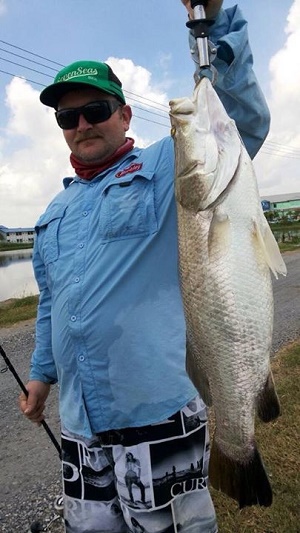