German angler Peter a returning client once again returned to Thailand this time accompanied by a friend fishing for Barramundi.
After arriving at the Barramundi fishing ponds a short distance from Bangkok the anglers wasted no time in attaching lures to short fluorocarbon leaders.
Using a combination of Rapala and Cultiva lures the anglers adopted a roving approach and stealthily moved between various ponds on the complex.
On only his second cast, after a slow and deliberate retrieve with a cultiva lure the German angler immediately hooked up with a highly acrobatic Barramundi which hurled itself skywards in an attempt to shake the lure from its mouth.
The Barramundi leapt clear of the water on several further occasions before the angler gained the upper hand and the fish was brought to the waiting landing net.
The chunky Barramundi was weighed at a satisfying 4kg’s and was quickly returned back to the pool.
Peter’s friend was next to hook into another hard fighting Barramundi which performed yet another spectacular aerial display.
Further cats into the adjacent pools continued to produce more Barramundi with both anglers experiencing double hook ups on several occasions.
With a slowing of sport in the early afternoon the anglers regularily changed lure pattern in an effort to stay in contact with the fish.
The anglers enjoyed tremendous sport throughout the day and amassed a twenty fish haul with the majority of the Barramundi weighing in the 2.5-4kg bracket.
Both Peter and his fishing companion both landed specimens to 5.5kg’s in their short six hour fishing session 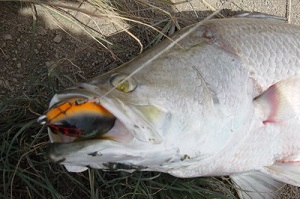