Constantine a European angler decided to try fishing for Barramundi near Bangkok.
After a short journey to Pilot 111 Fishing ponds the angler was soon casting to the hordes of showing fish.
After several slow retrieves the anglers rod was bent double as a highly acrobatic Barramundi threw itself out of the water shaking its head.
The Barramundi was soon netted after a few more minutes and proudly displayed for the camera.
Further casts resulted in more Barramundi between the 3-5kg range which aggressively attacked the anglers lures.
Constantine caught steadily throughout the morning with lots of hard fighting Barramundi being landed.
After catching over a dozen Barramundi the angler turned his attention to one of the adjacent ponds and began to fish for Giant Snakehead.
It was not long before the angler found a lure that agreed with the snakehead’s appetite and a series of lightning fast strikes saw several Giant Snakehead banked in quick succession.
At the end of the days lure fishing for Barramundi and Giant Snakehead, Constantine had succeeded in landed over twenty fish with Barramundi to 5kg and Giant Snakehead to 4kg 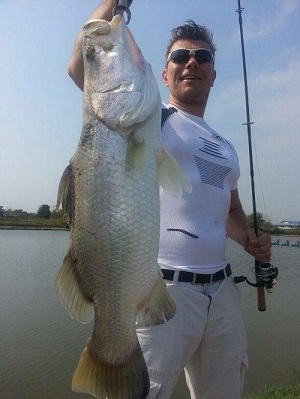