Bangkok resident Brendan went fishing to Now Nam Lake near Bangkok in search of Carp and Catfish.
Brendan fished three rods with 4oz Fox Method feeders loaded with local groundbait.
Strong fluorocarbon leaders were attached to short braided hooklengths presented 3 inches off the bottom with Owner hooks completing the set-up.
After a slow start which saw Brendan capture a few small Striped Catfish to 10kg’s the anglers hookbait was picked up by a much larger fish.
The unseen fish made an extremely powerful run along the far bank which created a massive bow wave some 100yards out into the lake.
Brendan piled on the pressure as the unseen monster continued to strip yard upon yard of mainline from his reel.
The battle raged on for a further two and a half hours requiring the angler to follow the fish up and down the entire length of the lake.
With very little strength the massive Mekong Catfish was finally netted by Boy.
The gigantic frame of the fish required three people to remove the fish from the water.
The massive 1.4m Mekong Catfish was estimated to weigh 50kg’s and was released after photography.
After regaining his composure the angler recast his rods to the productive area.
A mass of bubbles could clearly be observed over the baited area indicating the presence of carp feeding in the area.
Thirty minutes later an extremely powerful take saw Brendan setting the hook into another big fish.
The unseen carp then proceeded to powerfully hug the bottom moving out into open water before quickly turning and making its way back towards the nearby snags.
Brendan expertly turned the fish once again carefully guiding the fish away from the nearby structure.
Forty minutes after the initial take the fish finally revealed itself before once more powerfully diving back to the bottom.
A few more moments followed before the massive Giant Siamese Carp was finally netted by Boy.
The massive carp was estimated to be one of the lakes larger residents and observed to be an extremely old warrior displaying a stunning bronze coloration.
Brendan also captured several Big Head Carp during his highly productive days fishing at Now Nam Lake with weights to 9kg’s. 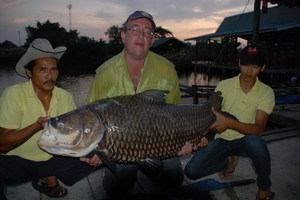