Bangkok big fish specialist Brendan returned to Bungsamran Lake in Bangkok fishing for Giant Siamese Carp and Mekong Catfish
After numerous recent big carp and catfish captures in recent weeks by the Fishsiam team the angler fished to a heavily prebaited marginal area.
Brendan offered buoyant hookbaits on Owner hooks over large balls of local groundbait on 4oz Fox Method feeders attached to fluoro leaders with short 3 inch braided hooklinks.
With hundreds of fish showing far out in the centre of the lake Brendan’s swim seemed almost devoid of fish with very few fish showing in the vicinity.
With total confidence in the teams extensive prebaiting campaign Brendan persevered and continued to top up the swim with bait.
Over the next few hours Brendan caught a few small Striped Catfish with weights between 8-12kg’s.
The swim seeming extremely quiet considering the mountain of bait that had been introduced.
Thirty minutes later an extremely fast take saw the angler clamping down on the spool as a carp headed towards the safety of the snags.
Massive swirls could be observed 10 yards from the bank as an angry carp chugged up and down the margins.
Fifteen minutes after initially hooking the fish saw the fish almost ready to be netted. After a few fraught moments at the time of netting the fish was finally brought into the net.
The large Giant Siamese Carp was observed to be in perfect condition and estimated to weigh 30kg’s.
After recasting the rods the angler didn’t have long to wait for his next run.
Literally minutes after recasting the rods Brendan’s left hand rod was away with line being ripped from the spool of his reel!
Brendan once again wound down into the fish which was already a considerable distance from where it had been hooked.
A twenty minute battle ensued which saw the unseen carp continuously trying to gain the sanctuary of the submerged timbers of the fishing platform.
Brendan continued to pile on the pressure in an attempt to stop the fish’s powerful runs towards the nearby snags.
Twenty minutes after initially hooking the fish saw the fish scooped up into the net before being hoisted onto the unhooking mat.
The fish was slightly smaller than the first carp and was estimated to weigh 23kg’s before being carefully released back into the lake.
After retying new rigs the rods were once again repositioned on the baited area for the next few hours.
Brendan went on to catch several more Striped Catfish from the area with weights to 12.5kg’s before finishing his short but productive six hour carp fishing session 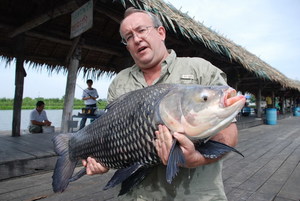