Bangkok resident and expat angler Brendan visited Now Nam Lake near Bangkok.
Fishing with Boy ,Brendan offered small ornamental livebaits in an attempt to capture one of the lake’s elusive Featherback residents. Brendan would go on to capture six Spotted Featherback’s topped by an extremely large specimen which was estimated to weigh a record breaking 6kg’s plus.
Brendan also captured two Marbled Sand Goby’s estimated to weigh upto 2kg’s and a new species not previously encountered by the team. 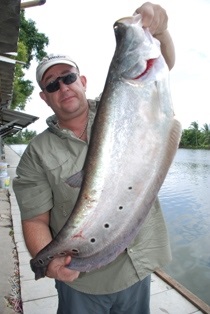