US angler Rene visited Thailand with the intention of doing some big game fishing for freshwater stingray at the Maeklong River.
The Big Game fishing enthusiast timed his visit to coincide with the daylight tidal influx from the Gulf of Thailand seeing the angler positioned in the lower reaches a few hours before high tide.
After positioning large deadbaits at various intervals across a wide section of the tidal river the anglers waited patiently for further developments.
Almost an hour after starting to fish a slight tapping on one of the rod tips indicated a disturbance sixteen metres below.
Slowly line began to trickle from the big game multiplier reel causing the ratchet to click gently as more and more line was removed from the reel.
Quickly engaging the gear on the reel saw the heavy Big game stand up rod curve down towards the surface of the river into its full parabolic curve.
A twenty minute battle ensued which saw the angler attached to a large freshwater stingray which towed the boat several metres upstream on its initial run.
The angler continued to apply pressure to the stingray from directly above the fish causing the stingray to powerfully hug the muddy riverbed in an attempt to evade capture.
After shifting the stingray on several occasions the angler finally managed to bring the stingray up from the bottom where it was fought out with relative ease in mid water.
With the stingray wallowing just under the surface the net was carefully unfurled beneath the large stingray before being secured alongside the boat.
The freshwater stingray was observed to be a female and measured at a width of 1.45m’s and estimated to weigh 100kg.
After a series of trophy shots were clicked off on the camera the Giant Stingray was carefully released back into the river.
With the tide still not at its highest level the anglers wasted no time in returning to the productive mark.
Deadbaits were quickly dispatched back down into the depths in anticipation of another freshwater stingray encounter.
Forty minutes later line once again began to be slowly pulled from the spool of another multiplier reel fished on a rod out in the main channel of the river.
Once again the angler engaged the clutch of the reel and wound down hard into the stingray.
The freshwater stingray on this occasion was a much smaller specimen and was landed after a short five minute battle.
The small male Giant freshwater stingray was estimated to weigh 60kg’s and measured with a wingspan of 1.35m’s.
The freshwater stingray was promptly released back into the tidal river after a few obligatory
trophy shots.
With just over an hour left for fishing yet another rod fished in the main channel of the river burst into life as an unseen freshwater stingray moved across the riverbed with the bait.
The battle on this occasion lasted ten minutes and saw the stingray easily over powered on the heavy big game fishing equipment.
The freshwater stingray was observed to be a small male weighing an estimated 50kg’s and was released shortly after photography 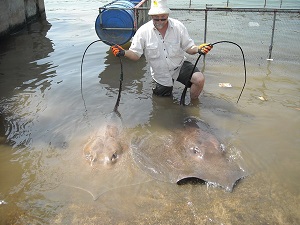