Visiting specimen hunters Kevin Tan from Singapore, Mooky another Singapore resident and Mick from the UK teamed up to fish for the Giant freshwater stingray on the mighty Bang Pakong River near Chachoengsao. Guided by the entire Fishsiam team the anglers hooked a large Giant freshwater stingray whilst fishing mid river.
A two hour battle commenced which saw the anglers taking turns to winch the monster from the depths.
Using extremely strong tackle the anglers finally brought the prehistoric predator to the riverside.
The freshwater stingray was observed to be a large female with a width of 1.8m, the monster ray was estimated to weigh 150-160 kg and was released after photography.
The entire battle was caught on video which will be appearing in our video pages shortly. 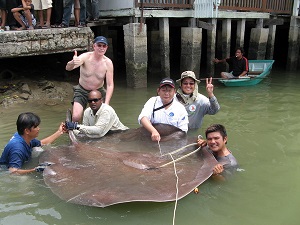