The second day of Tim’s Giant freshwater stingray fishing trip saw the angler once again fishing on the Maeklong River.
After landing three fish on the previous day the anglers were confident of a take.

The take came a few hours later and saw the English expat engaged in an epic battle with an unseen stingray.
After clamping onto the bottom on several occasions interspersed with long and powerful runs the Giant freshwater stingray was brought off the bottom several times.

The battle continued well over an hour before Tim finally managed to bring the giant fish under some sort of control.
After bringing the stingray off the bottom once again, he was able to keep the fish away from the riverbed and began to winch the stingray up through the depths.

On bringing the Giant freshwater stingray to the riverside it was estimated to weigh 170-180kg’s and proudly displayed by the captor for photos.
The stingray was released shortly after. 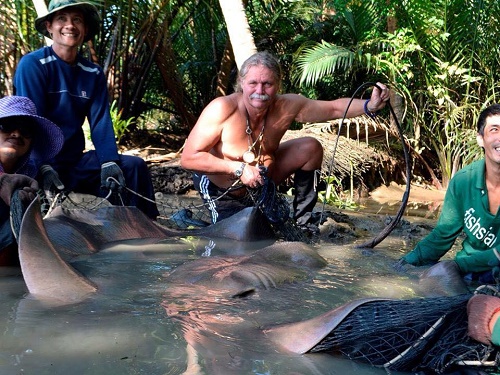