Visiting angler Alan Tan from Singapore fished a short day session at Bungsamran Lake in Bangkok.
Fishing sliding float tactics Alan landed a succession of large Mekong Catfish with weights to 32kg’s+.
In addition Alan landed several Striped Catfish to just under 29kg’s.
Later in the afternoon Alans bait was picked up by a much larger Mekong Catfish which took over an hour to land.
The gigantic Mekong Catfish was weighed at a massive 82 kg’s doubling AIans previous personal best of 40kg’s 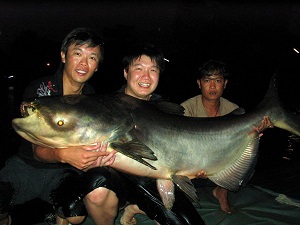