Bangkok resident and keen angler Brendan from the UK visited Bungsamran Lake in Bangkok fishing for Mekong Catfish.
On arrival at the lake it became evident that the lake was extremely busy with numerous local anglers fishing on the public bank.
Brendan chose to fish in a quiet part of the lake away from the hordes of local anglers and heavily baited a marginal area close to a nearby snag with ten kilo’s of locally produced groundbait.
Brendan fished large 4oz Fox Method feeders loaded with Lam (locally produced groundbait) attached to fluorocarbon leaders. Short 3 inch braided hooklinks attached to Owner Hooks completed the set-up which was popped-up above a large ball of groundbait.
Brendan caught several Striped Catfish with weights to an estimated 15kg’s throughout the morning but with many anglers present at the lake the fishing was much slower than normal.
The Bangkok angler persevered with his tactics continually topping up the swim with more groundbait.
After a quiet spell which saw the angler experience a series of aborted takes Brendan changed over his hook links in an attempt to up his catch rate.
With new hook links attached Brendan soon received another take this time setting the hook firmly into a large Mekong Catfish.
Fifteen minutes later a Mekong Catfish of some 25kg’s was carefully netted.
This would herald the start of a series of Mekong Catfish with relatively low weights of between 10-25kg’s falling to the anglers rods.
A quick take on a rod fished close to the snags saw the angler quickly clamping down on the spool in an attempt to stop the unseen fish gaining the sanctuary of the snags.
The unseen fish was quickly turned away from the snags and was beaten after a short five minute battle.
A large Pacu of almost 9 kg’s was brought into the net.
The Pacu was an extremely chunky specimen with large molar like teeth and was released after photography.
Brendan’s final tally for his days fishing consisted of fourteen fish with six Striped Catfish to 15kg’s, six Mekong Catfish with weights 10-25kg’s and two Pacu with weights of 3kg and 8.25kg’s. 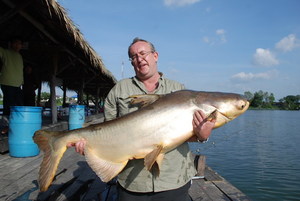