Peter Lipah visiting specimen hunter from Germany joined Boy and the Fishsiam team on the Ban Pakong River. With the river still swollen from heavy rains upriver and containing a high amount of floating vegetation the conditions were far from ideal. After a few hours fishing the German angler hooked a Giant Freshwater Stingray but seconds later the hook was straightened!
The day passed by with one more aborted take and the vegetation continued to foul the lines. With only a few hours of daylight left conditions became much better, with the tidal river being at its highest making the presentation of baits much easier.
Peter received a take on one of his rods fished at distance and quickly took to the boat to do battle with the unseen behemoth. After winding down hard the rod was pulled violently towards the riverbed. Peter an extremely capable angler battled the Giant Freshwater Stingray for almost one hour bringing the fish to the boat on several occasions before the monster ray was finally beaten. The massive Giant freshwater Stingray was identified as being a large female with a width of 2m’s plus and was towed to the riverside. With the light fading photographs were quickly taken before the mighty fish was released. The fish was estimated to weigh 185-195kg’s 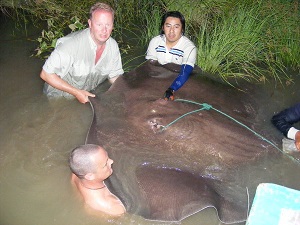