Norwegian angler Tay Young continued his fishing holiday in Thailand with a visit to the Maeklong River fishing for stingrays.
On arrival the angler was transported to a wide section of the tidal river that has previously produced big stingrays in the past.
After deploying floats at various intervals across the river the angler waited for events to unfold.
With the trip timed to coincide with the daily tide the water level began rising.
One of the floats suddenly burst into life and began moving slowly downstream.
After winding down into the Giant freshwater stingray the heavy duty stand up rod was pulled into full battle curve as it took the strain of a big stingray deep below.
The Giant freshwater stingray responded by towing the boat several metres downstream before going to ground on the bottom.
Re positioning the boat directly above the stingray gave the angler a much better angle to pull and Tay Young bent the full weight of the rod into the stingray in an effort to prise it off the bottom.
After several minutes the stingray released its grip on the bottom and was away on another powerful run.
The battle continued for almost an hour with the angler gaining line only for it to be taken off again by the stingray.
Finally almost an hour after hooking the Giant freshwater stingray the fish was brought over the waiting net.
The Giant freshwater stingray was measured at a width of 1.7m and was estimated to weigh 150-160kgs.
After a few trophy shots the stingray was released back into the river where it swam away strongly. So some success for Tay whilst Big Stingray fishing in Thailand. 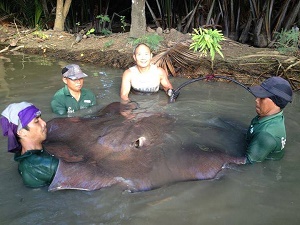