The third and final day of the NHK stingray fishing trip at the Mae Klong River saw the Japanese film crew making an early start. With only footage of small Giant freshwater stingrays so far in addition to several Bull Sharks floats were positioned.
The first few hours saw nothing happening until a slow take on one of the floats fished mid river indicated the arrival of the stingray’s. After a short fight a smallish stingray of 30kg’s was brought into the boat.
After examination by VRMC from Chulalongkorn University the stingray was tagged and released.
Fishing into the afternoon saw no further action until the team decided to change location.
The move paid off immediately and saw the anglers attached to a much larger fish.
A forty minute battle ensued which saw the Giant freshwater stingray clamping onto the bottom on several occasions.
Finally the Giant freshwater stingray was brought to the waiting net to reveal a good sized female of 1.8m’s in width.
After a brief examination the stingray was estimated to weigh 190kg’s and released back into the river.
The film can be seen on NHK channel in Japan in the coming weeks 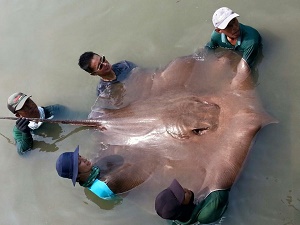